Posted at 15:06h in Alumni by NavarroNews 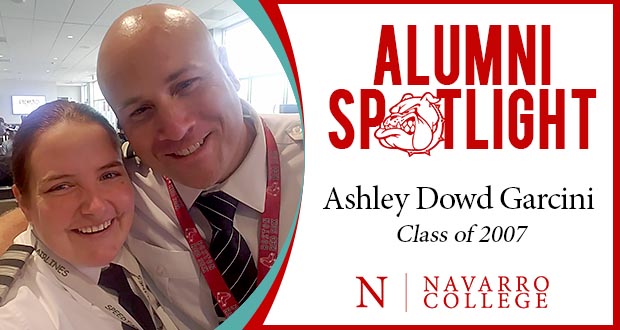 Ashley received her Associate’s degree from Navarro College in 2007 and transferred to University of North Texas (UNT). After UNT graduation, she attended Airline Transport Professionals to receive all of her pilot ratings. Ashley previously worked six years at an airline, ExpressJet where she met her husband and fellow pilot, Carlos Garcini. In January of 2017, Ashley was hired at her current airline, Frontier Airlines, where she’s a First Officer on the Airbus 320. Both Ashley and her husband live in Colorado and look forward to the day they can move back to Texas.

“I literally share my positive experience about the impact Navarro College had on me any chance I get with co-workers looking for advice for their college-bound kids.

My favorite memory was 8 am on Monday morning in Mr. Dan Nesmith’s history class. It was my very first day and he came in, intimidating as ever, and specifically singled me out (since I had my textbook on my desk) and asked “how much did that book cost?” I answered “116 dollars.” He yelled, “A HUNDRED AND SIXTEEN DOLLARS??! You would think if I spent $116 on a book I would actually read it!!” That night and every night for his class I actually read the book I paid $116 for and managed to get my very first college A.

My reason for attending NC was financial based. It was on the heels of my brother being seriously injured and my family couldn’t help me the way they initially wanted to financially with my higher education without causing a serious strain on them. I worked in town at Cotton Patch Café and was able to pay out of pocket for NC.

I tell everyone this is the best move financially and mentally. When I first walked through the doors at NC I wanted to be a professional photographer. Today I’m an airline pilot. I changed my mind many times through the years and didn’t suffer financially for changing my mind. I was able to focus on the basics while at NC and had all of my credits transfer. I was able to complete my bachelor’s in four years with the help of good advisors and because I didn’t have extra erroneous classes. I feel if i had attended a larger school it would have been more difficult to change my mind due to the extra expense of extra classes.”

“Specifically, my time there wouldn’t have been the same without the influence of Dan Nesmith and Dr. Laurie Robertstad. They truly have a passion for teaching and I majored in History at the University of North Texas due to the inspiration Professor Nesmith had on me. The biggest thanks I have though is to Dr. Tommy Stringer and the rest of the MC and Mattie Caston Scholarship Committee. Receiving that scholarship was life changing and allowed me to fulfill my dreams.”

Submit a story: Know of a student story you’d like to see featured here? Send an email to marketing@navarrocollege.eduand tell us all about it!