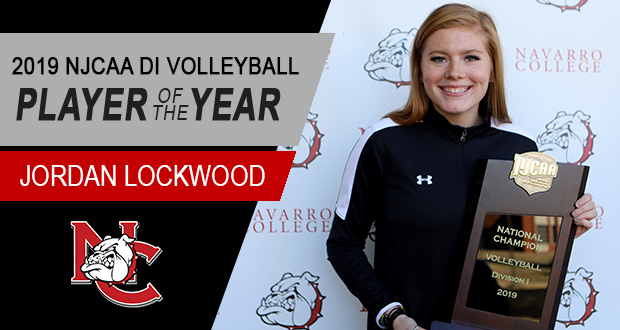 Posted at 12:50h in Corsicana Campus by NavarroNews

Sophomore outside hitter Jordan Lockwood’s rise at Navarro during the fall has been something to behold.

So, too, is her now Christmas-like collection of post-season awards that’s grown by two since Thursday with prestigious Player of the Year Awards from The NJCAA and The American Volleyball Coaches Association (AVCA).

Four months and 31 matches after transferring from The University of Houston and enrolling at Navarro, Lockwood claimed prized POY possessions for her dream season, and more honors for the unbeaten national championship team that swept 22 of its opponents and lost only 11 games.

Since November 3, Lockwood’s resume already has been reinforced greatly by First-Team All-American designations by the NJCAA and by the AVCA, plus an NJCAA Championship, Tournament Most Valuable Player and Region XIV Conference Player Of The Year honors.

Lockwood’s play this season merited each award, underscoring the talent, meteoric rise and soaring value of a multi-faceted player. Lockwood, who hit at least .300 in 13 matches, led coach Andy Cavins’ Bulldogs in kills (397), attacks (963) and points (467.5), finished second in block-solos (20), third in block-assists (61) and fourth in digs (229). She ranked Top 10 nationally in kills and points-per-set (4.7).

“Jordan has proven her dominance at the biggest moments throughout the season,” Cavins said. “Her performance in a tough Region XIV combined with a historic performance in the National Championship will be a part of Navarro lore for years to come.”

Lockwood totaled double-digit kills in all but six of the matches in which she played — including 12 or more in the final six post-season matches of the year. In the extended, 3-2 championship win over Seward County, Lockwood fashioned her fourth kill-dig double-double of the season with personal-highs of 27 kills among 71 attacks, along with 15 digs.

“Jordan is a special player that teams and coaches are lucky to have,” said Cavins. “She has worked hard on the court and in the classroom to prepare herself for success both this year and moving forward.”

Lockwood’s addition this year solidified a strong Bulldog team that maintained Top 3 ranking through 10 regular-season poll periods and finished statistically among Top 10s in six categories. Navarro, 69-7 in two seasons, has appeared among the NJCAA’s Top 8 in 19 consecutive polling periods, including the last three weeks of 2019 at No. 1.

She currently is being recruited by a myriad of schools from the Big 12, AAC, Mountain West, and SEC and hopes to make her decision in the coming weeks.
“We are so proud of Jordan’s development this year and look forward to seeing her continue to dominate at her next institution,” Cavins said.