Posted at 20:27h in Features by NavarroNews 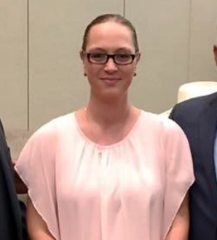 Meet Ms. Jasmin Hoover! We are shining a spotlight on Jasmin because she recently became an American citizen after moving to the U.S. seven years ago.

Background: She is 38 years old and was born and raised in Germany. Her husband and two children moved to the U.S. in 2012 due to a change in military duty station. In 2016 she decided to start a new chapter in her life and registered for Navarro College. She volunteers every Wednesday as a youth leader at the Cowboys Church of Ellis County. Her husband is a retired First Sergeant in the U.S. Army.

Future plans: Was accepted to Tarleton State University and will be pursuing a Bachelor’s of Applied Sciences and then the alternative teaching route to become a math teacher.

Her advisors say she’s a great example. Her education in Germany was not recognized when she came to the U.S. so she had to start over. She works full time and has a stellar GPA even with English being her second language. She hasn’t let roadblocks stop her from showing her kids what’s possible!

Submit a story: Know of a student story you’d like to see featured here? Send an email to marketing@navarrocollege.edu and tell us all about it!