This is the second in a series of articles anticipating Navarro College’s 75th anniversary. There is a full slate of special events and activities beginning on September 16, 2021 with the Bulldogs Unite Ceremony and culminating with The 75th Anniversary Gala on May 21, 2022. This year of celebration has been given the tag-line “Looking Back, Moving Forward”.

Looking at life today and realizing how much planning, discussion and review go into the development of a business, the construction of a building or, for that matter, a vacation trip, it is amazing that from the day Navarro County electorate voted the Navarro Junior College District (July 16, 1946) into existence and the first day of classes (September 16, 1946) was sixty-three days!

The Board of Trustees, comprised of Curtis Patterson, Bruce McCormick, Lloyd Carraway, O.L. Albritton, L.B. Bonner, Ralph Brown and J.W. Richards met for the first time on July 22, 1946. Their first order of business was to name Ray Waller as the first president of the school. At the time, Mr. Waller was the Superintendent of Schools in Dawson located in the western part of Navarro County. President Waller’s first task was to create a budget for the newly created school. The budget for the first year was $52,500 and was based upon a forecasted 200 students.

The next mission for the newly appointed president was that of hiring a faculty. The first two instructors hired for NJC were M.S. Cook in English and James Edgar in Science. As the faculty members were hired and they took their places at NJC, many well-known universities were represented, including SMU, TCU, Baylor, Columbia, The University of Texas at Austin, Northwestern and Texas A & M.

The school’s location, about six miles from downtown Corsicana, was seen as a potential problem for commuter students. Peggy Herod, who is a member of the Homecoming Committee, remembered riding a school bus from Mildred to the airfield along with the “grownups” who were going to NJC. The college students would be dropped off first at the old airfield and then the elementary children, like Peggy, would go on to the community of Navarro to school. Of course, this was before the Navarro buses came into existence and pointed out the need for some type of mass transit. For this reason, the Board of Trustees authorized the purchase of four buses which would have specific routes and would be used to bring students to the college from out-lying areas. There were college-owned buses bringing students from Navarro’s far-reaching service areas until the late 1960’s.(Peggy’s late husband, Liston J. Herod, Jr., was a member of the Board of Trustees at Navarro College until his death in 2008).

The first year of classes saw an enrollment of 238 students. Approximately 80 percent of the students were former WWII veterans who were resuming their education or starting it. Of the 238 students, there were only 44 women enrolled. Remember that the college had once been a military installation and it was constructed as a very basic, utilitarian facility for training pilots. Margaret Berry, a former instructor and administrator, recalled that she and some of the other women tried to brighten the campus by planting flowers around the buildings.

The first year of Navarro’s existence reflected the potential growth of the college, not only with the graduation of thirteen students who had completed enough credit hours from other schools and NJC to receive diplomas, but also with the creation of athletics, a girls’ dance and drill team called The Senoritas, The Block “N” club for athletic lettermen and one of the most prestigious organizations on campus, Phi Theta Kappa national academic honor society. One club that came into existence as a product of the college is “The Barracks Bunch”. This group was made up of the people who lived in the old Army-Air Corps barracks during the first years of the college’s existence. There were many married couples who lived there while one or both attended classes at Navarro.  This elite group of men and women, most of whom are no longer with us, are well-known locally and have been honored on campus by the construction of a bell tower dedicated to these who were a part of the Greatest Generation. 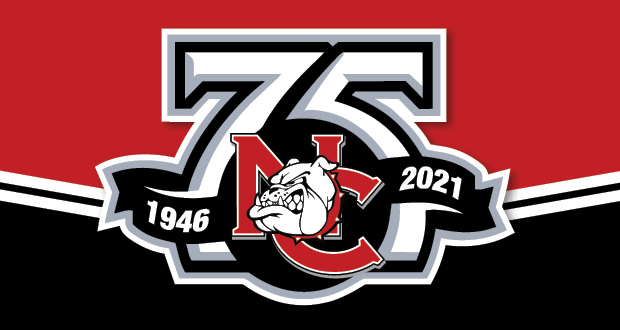