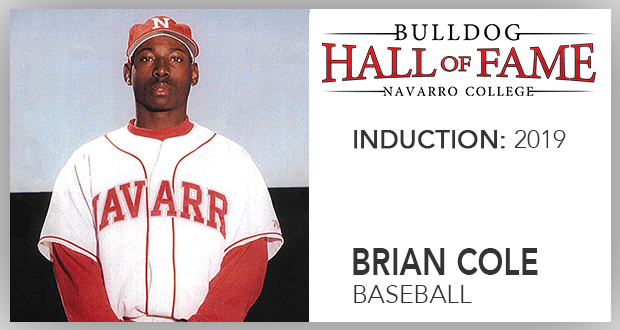 The 5-foot-9, 168-pound outfielder from Meridian, MS, earned Baseball America’s Junior College Player of the Year honors at Navarro after batting .524, hitting 27 home runs, driving in 82 runs, scoring 95 and stealing 49 bases in a total of 60 games for coach Skip Johnson in spring, 1998. Cole had been NC football’s second-leading receiver (16-221-2) and kick returner in 1997.

The New York Mets selected Cole in the 18th round of the 1998 MLB Amateur Draft and immediately projected him as a cornerstone for 2002. Cole lived up to that promise at each stop of Rookie, Class A and AA baseball through the 2000 season when he was honored as the Mets’ Minor League Player of the Year.

On March 31, 2001, at age 22, Cole was killed in a single-car rollover near Sneads, FL, as he returned to his Mississippi home.

Inductees will be honored at an induction ceremony on Saturday, Sept. 28 at 12 p.m. at the Cook Education Center. Tickets for the event are $15 per seat and may be purchased at athletics.navarrocollege.edu under the Inside Athletics tab, or you may contact Michael Landers at Michael.landers@navarrocollege.edu to reserve space.