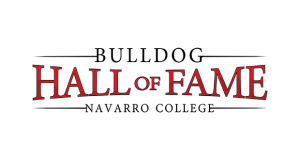 CORSICANA, TX – At a press conference on Friday, July 12, Navarro College announced names for the inaugural class of the Bulldog Hall of Fame. The newly established Bulldog Hall of Fame will honor its former student-athletes, coaches, teams and supporters who have enriched the legacy of the institution through intercollegiate athletics. “We are excited to celebrate and recognize those who have exhibited exceptional ability and performance in their selected field of athletics and have represented Navarro College in an exemplary manner,” said Athletic Director Michael Landers.

An induction ceremony will be held during a luncheon on Saturday, September 28 at the Cook Education Center. Honorees will receive ‘Bulldog Red’ blazers and plaques commemorating their induction and be introduced during halftime of the football game on the same night. A special Hall of Fame room will be established on the Corsicana campus where all members will be commemorated.

We are pleased to introduce further the inaugural class of the Navarro College Bulldog Hall of Fame, listed alphabetically by last name.

Cole, who starred in football and baseball here, is memorialized by awestruck major league stars in an April 1, 2013 Sports Illustrated article entitled, “The Best Baseball Player You Never Saw”. The 5-foot-9, 168-pound outfielder from Meridian, MS, earned NJCAA Baseball Player of the Year honors at Navarro after hitting .524, smacking 27 home runs, driving in 82 runs, scoring 95 and stealing 49 bases in a total of 60 games for coach Skip Johnson in spring, 1998. Cole had been NC football’s second-leading receiver (16-221-2) and kick returner in 1997. The New York Mets selected Cole in the 18th round of the 1998 MLB Amateur Draft and immediately projected him as a cornerstone for 2002. Cole lived up to that promise, producing tremendous numbers at each stop of Rookie, Class A and AA baseball through the 2000 season when he was honored as the Mets’ Minor League Player of the Year. On March 31, 2001, at age 22, Cole was killed in a single-car rollover near Sneads, FL, as he returned to his Mississippi home.

Dill, a two-year starting pitcher for Navarro, returned as an assistant coach here at age 24, and succeeded Skip Johnson as head coach in 2007. Dill directed Bulldog baseball to four conference championships and two JUCO World Series appearances — including the 2011 NJCAA Championship — during eight seasons (2007-2014). Dill’s 307-157 career coaching record includes the three highest single-season win totals in school history (47 in 2008, 46 in 2011 and 44 in 2013).

Duncan, a graduate of Blooming Grove High School and Navarro College, worked 34 years at NC. She served in 1974 as Dr. Kenneth Walker’s Administrative Assistant for three years, and later as the college’s Business Manager. Faculty, staff and students all felt her warm, welcoming spirit and personality. A multi-time “Bulldog Backer of the Year” winner, Duncan’s biggest hobby was Navarro Athletics. Regardless of sport or travel distance, she never missed opportunities to go to games or lend her support. Duncan passed in 2018 after a long battle with cancer.

Johnson amassed a 13-year record of 414-234 in 648 games here between 1994 and 2006 and led Bulldog baseball to nine conference championships. Johnson’s teams won 30 or more games 11 times. The Denton, TX, native played at Ranger College at The University of North Texas. Johnson completed his second season as head coach at The University of Oklahoma after a 10-year run as assistant coach to Augie Garrido at The University of Texas.

Montgomery served NC 30 years – the first six as a golf coach whose teams placed among the NJCAA Top 10 three times, and the final 24 entrusted with athletics administration. On his watch, all of Navarro’s athletic programs flourished, captured multiple conference titles and experienced their highest levels of success on the national level. Montgomery also served as Region XIV Men’s Athletic Director, head of the NJCAA Football Committee, and served on other NJCAA committees in other capacities. Montgomery passed in 2018 after a battle with cancer.

Stephens compiled a 354-33-5 record in dual-match play and led Navarro tennis to 11 consecutive conference championships. His Bulldogs finished among the Top 12 at the NJCAA National Tournament in Ocala, Fl., between 1967 and 1974, including a third-place in 1973 and a fifth in 1972. Between 1967 and 1974, his NC squads won 122 consecutive dual matches. A renowned recruiter with worldwide connection to rising talent, Stephens was inducted among the first group of five in the NJCAA Men’s Tennis Coaches Hall of Fame in 1992, and among the first group of four in the NJCAA Women’s Tennis Coaches Hall of Fame in 1993. The NJCAA Tennis Coaches Association presents a Herschel Stephens Coaching Award annually. A former English and journalism instructor here, Stephens also coached women’s basketball one season. Stephens passed away in 1983.

Stubbs won Navarro’s first national championship in 1964 when he shot a four-day 303 score and claimed individual honors at the 6th NJCAA Tournament in Grand Rapids, Mi., in 1964. The Texas Junior College Golf Tournament champion went on to play at The University of Houston for 16-time NCAA champion golf coach, Dave Williams.