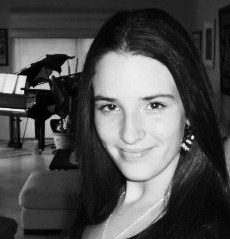 A native of Florida, pianist Amanda Albert Hughes has distinguished herself in the field of piano performance, and has given several recitals across the USA and Europe. In May of 2013, she premiered the music of the Russian composer, Vladimir Drozdoff, at the St. Petersburg Conservatory. She gave her first full solo recital at the age of eight, and made her orchestral debut at age 16 as a winner of the Ars Flores Young Artist Concerto Competition, performing Mendelssohn’s Piano Concerto in G Minor, Op. 25. In addition to having an active performance life, Amanda has composed over eighty works, including both solo and chamber music. In 1999, she was chosen as a top five winner of the New England Conservatory Composition Competition. She has been featured in five full length articles, and has also made numerous appearances on public radio.

Amanda began her studies at the age of six with Mrs. Deborah Bohl, and later with Mrs. Edit Palmer, an adjunct professor of music at Stetson University. The youngest to graduate in her class, Amanda was awarded a music scholarship at Lynn University where she pursued her bachelors of music at the age of 13 under the tutelage of Dr. Roberta Rust. During her studies, she was received with academic success, earning the Presidential Honors award and being published on the National College Dean’s List twice in a row. She was a prize winner in the Madelyn Saverick Piano Competition, and was chosen as the alternate winner in the senior state division of the Music Teacher’s National Associate (MTNA) Competition. In 2006, she was chosen to represent the US as the International Music Laureate. Amanda graduated summa cum laude, and continued to pursue her education at Northwestern University where she earned her master’s degree in Piano Performance with teacher Dr. James Giles. Amanda is currently a doctoral candidate at the University of Houston, where she was awarded a music fellowship and accepted into the studio of legendary pianist and recording artist Abbey Simon.

Aside from performing, Amanda has a passion for teaching and believes that the greatest reward is being able to pass on knowledge to aspiring musicians. Amanda currently holds a position at Navarro College where she heads the piano department, teaches Music Theory, Ear Training, Class Piano, gives private lessons, and assists the choirs by accompanying and leading sectionals. In addition, Amanda has a private studio where she teaches students of all ages and levels. She enjoys helping out the community and regularly volunteers her musical talents to churches, weddings, nursing homes, and organizations.