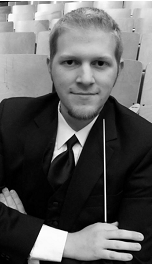 Mr. Buckrucker has been professor of music and Director of Navarro College Bands since 2014. In this position he directs the 100+ member marching band, coordinates basketball and volleyball band activities, and is responsible for game day activities for volleyball, basketball, and football. Additionally, Mr. Buckrucker is also the Director of the Navarro Jazz Band, Director of the Navarro College Wind Ensemble, and Chair of the Music Department. He also assists in the instruction and rehearsal of multiple chamber ensembles and academic music major programs.

Mr. Buckrucker received his Master’s degree in music performance with a concentration in instrumental conducting from Washington State University. His undergraduate degree from Methodist University is in both Music Performance (saxophone) and Music Education.

Mr. Buckrucker is regularly used as a clinician and adjudicator throughout the United States. He has directed numerous collegiate bands, and has been a guest conductor for multiple performing ensembles within national conferences. He has been a guest conductor and/or performer in collegiate and professional venues including Benaroya Hall, the Myerson Symphony Center, and much more. In addition to being recognized as a featured artist in multiple venues, he has also received many awards including the Semper Fidelis award for music excellence at the age of 17, the Willis c Gates award for music excellence in the field of performance, and many other performance based awards throughout his career. He also served as a member of the Fayetteville Jazz Orchestra, the Fayetteville Symphonic band, The United States Army Forceomm Band, and the Corsicana Swing Orchestra. Most recently, Mr. Buckrucker has been a guest artist with IMEA Jazz Entertainer of the Year Award winner, Mr. Aaron Myers, as well as a featured guest conductor for the Dallas Winds Summer Music Program.

Mr. Buckrucker no lives in Corsicana, TX with his wife Jessica and their daughter, Isabella. 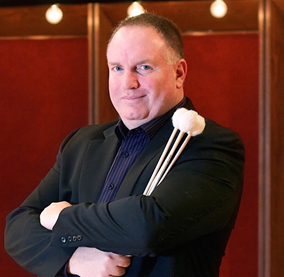 Mr. Nutting has spent the past twenty years working as an Educator, Arranger, Drill Designer, Program Coordinator, and Adjudicator throughout the Midwest and in Texas. He currently serves as the Associate Director of Bands and Director of Percussion activities at Navarro College. Prior to his position at Navarro, he served as the Director of Athletic Bands at the University of Nebraska at Omaha.

As a percussionist he has performed with a wide variety of well-known ensembles including the Northeast Missouri State (now Truman State) University Jazz Ensemble, the Drake University Jazz Ensemble, the University of Nebraska Omaha Symphonic Wind Ensemble, the Des Moines Symphony, and the Bob Weast Big Band. He has also had the opportunity to perform with such notables as Willie Thomas, Bunkie Green, Mike Metheny, Pete Christlieb, Frank Mantooth and John Fedchock. In addition to his performance experience, Mr. Nutting is an active conductor and clinician, having directed college and high school ensembles at professional conferences throughout the Midwest and on stages in France and Switzerland.

Mr. Nutting is a graduate of Drake University, holding a Bachelors Degree in Percussion Performance. He has also pursued graduate studies in Theory and Composition at Northern Illinois University, and holds a Master of Music degree in Instrumental Conducting from the University of Nebraska Omaha. He is a member of the College Band Directors Association, the Percussive Arts Society, the Jazz Education Network, the National Association for Music Education, Phi Mu Alpha Sinfonia and Kappa Kappa Psi. 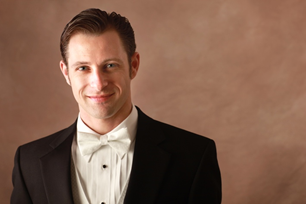 Kerry Hughes joined the faculty at Navarro College in 2016. He is completing a doctorate at the University of Houston and loves teaching and performing. He has performed on oboe and English Horn with orchestras throughout Texas and has had extensive chamber music experience. Mr. Hughes has performed numerous solo and chamber recitals consisting of diverse repertoire. He was a member of the Houston-based woodwind quintets Scirocco Winds and Windsync, and his performances with Windsync included tours to Vancouver, Los Angeles, New York, New Jersey, and Rhode Island. At the same time he was a member of the Young Artist Program with Da Camera of Houston. An avid fan of the outdoors, he performs and teaches in the summers at the Blue Lake Fine Arts Camp in Twin Lake, Michigan. He also teaches at band camps at SFA and at WTAMU. He has toured with the New England Youth Ensemble based at Columbia Union College as acting principal and has performed twice with the Texas Music Festival Orchestra based in Houston. He has also performed at the John Mack Oboe Camp and under the baton of numerous well deserved conductors. Kerry has performed in opera productions for Puccini’s La Boheme, Janacek’s Katya Kabanova, Britten’s Albert Herring, Daniel Catan’s Florencia in el Amazonas and Il Postino, and Rossini’s Il Viaggio a Reims. He regularly performs at the TMEA Convention in San Antonio, TX, and the Colorado Music Educators’ Association convention. His primary teachers include Dr. Anne Leek (Houston Symphony Orchestra), and Janet Lanier, (oboe and English horn of the Amarillo Symphony Orchestra). Kerry has taught undergraduate music theory, aural skills, and woodwinds. He is also the oboe professor at Stephen F. Austin State University. When not teaching or performing, he enjoys traveling and visiting family with his wife, Amanda, who teaches piano, music theory, and ear training at Navarro College. 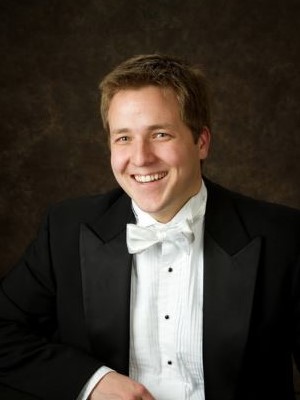 As a soloist Mr. Wallin has performed internationally at the Central Conservatory of Music in Beijing, China, and continues to perform recitals, and give masterclasses throughout the United States.  Mr. Wallin has also taken part in several recording projects, including the 2014 Grammy nominated recording of Milhaud’s L’Orestie D’Eschyle.  He was a co-presenter at the 2016 International Trumpet Guild Conference with Jason Bergman, and has several international publications. His primary teachers are Jason Bergman, William Campbell, and David Brown and Nick Norton. 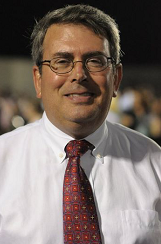 Dr. Stephen Shoop teaches low brass at Navarro College in Corsicana, Texas and also serves as Conductor of the Mesquite Community Band. Dr. Shoop holds a BME degree from Texas University, MME degree from Indiana University, and a PhD in music education from the University of North Texas. In 2011, Dr. Shoop completed his twenty-seventh year of teaching band and instrumental music in the public schools of Texas. From 2012-2014, he taught at the University of Texas at Brownsville. Primary responsibilities included teaching applied tuba and euphonium, music education coursework, supervising student teachers, playing ttuba in the faculty brass quintet, and conducting the Rio Bravo Wind Ensemble. Dr. Shoop has served as the primary coordinator for Merry Tubachristmas concerts in Dallas and Fort Worth for over 30 years.

In addition, Dr. Shoop is a freelance tuba player, arranger, author, and publisher. He has over thirty published compositions and arrangements to his credit, as well as articles in The Instrumentalist and I.T.E.A. Journal. In 2004 Dr. Shoop started his own music publishing company – Stephen Shoop Music Publications. Current speciality areas include solors, ensembles, and pedagogical materials for low brass instruments, and music of historical significance. 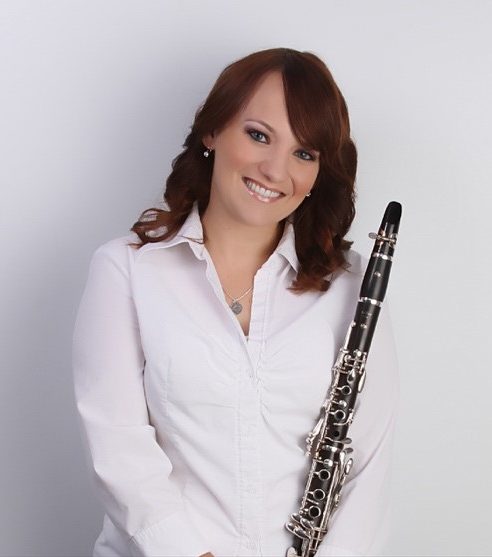 Jaime Kovar has been musically active in Texas for the past ten years as a teacher, clinician, adjudicator, and performer. She is currently an Associate Director of Bands in the Fort Worth area, and maintains a successful clarinet and saxophone studio. Many of her students have earned accolades such as placement in the Oklahoma and Texas All-State Ensembles, as well as placements in university music programs. Jaime also has an extensive background in colorguard design and has been active with Drum Corps International and Winterguard International throughout her career.

She is currently ABD in her Doctorate of Education, and holds a post-master’s certification in Educational Administration from Lamar University. In addition, she has also received a Masters of Music in Clarinet Performance from Oklahoma City University and a Bachelor of Music Education from Southwestern Oklahoma State University. Her professional memberships include the Texas Music Educator’s Association, Texas Bandmasters Association, and Kappa Kappa Psi. 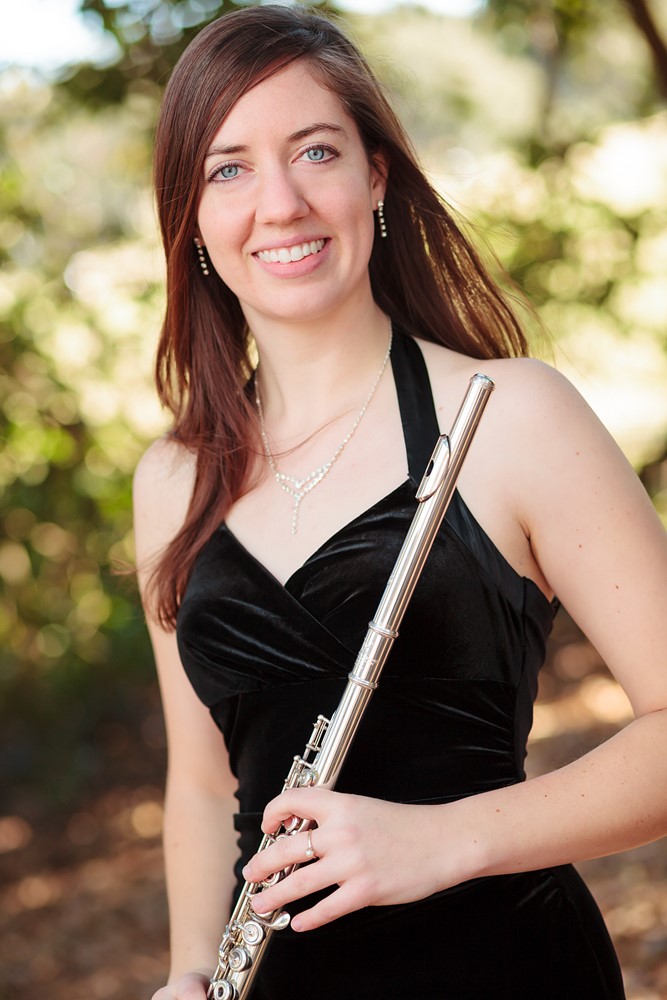 Dr. Bethany Padgett is the current professor of Flute and active freelance performer in the Dallas/Fort Worth, Texas area. She received her Doctor of Musical Arts in Flute Performance with a Theory minor from Louisiana State University in 2013, her Master of Music from Illinois State University and her Bachelor of Music from Western Michigan University. Her primary teachers include Katherine Kemler, Kimberly Risinger and Christine Smith.Bethany has performed with the Fort Worth Symphony Orchestra, Louisiana Philharmonic Orchestra, Baton Rouge Symphony Orchestra, Shreveport Symphony Orchestra, Acadiana Symphony Orchestra, Opera Louisiane and the Louisiana Sinfonietta. As a chamber music player and advocate for new music, she has performed numerous World Premieres including Seven Refrains by Brett William Dietz (2011) and Sonata for Flute and Piano by Alejandro Arguello (2012). Two of her most recent commissions, to be completed in 2016, include a composition by Roy Magnuson for solo flute and a composition for alto flute and marimba by Joe W. Moore III. As a solo artist, she has won numerous competitions including the NFA Masterclass Performer Competition (2012), NFA Piccolo Masterclass Competition (2013) and NFA Convention Performers Competition (2013). She has also been a member of the Baton Rouge-based free-improvisation group Incense Merchants and has performed with the Dallas-based Indian classical and fusion group Sangeet Millennium. Bethany is also active as a flute teacher. In fall 2014 she served as temporary adjunct professor of flute at Illinois State University. Bethany has served on the board of several organizations including Music Teachers National Association and Louisiana Flute Society, and currently serves as Festival Co-chair for the Texas Flute Society.