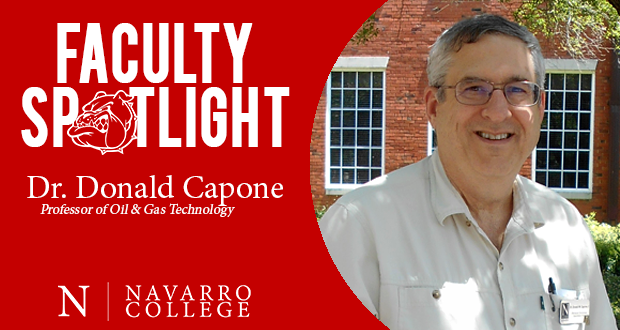 Dr. Capone grew up in Wilmington, Massachusetts and used his music scholarship to study Physics at Boston College. He attended graduate school at Tufts University and received an M.S. in Physics and Ph.D. in Condensed Matter Physics. He did his thesis research at the Francis Bitter National Magnet Laboratory at Massachusetts Institute of Technology.

In 1989, Dr. Capone came to Texas for the Superconducting Supercollider Project and was Head of Superconducting Technology when the project was canceled in 1993. Following the cancellation of the Supercollider, he moved on to hold positions as a General Manager, Vice President of Technology, and Director of Quality for several product development/manufacturing companies in Texas. It was in 2007 that Dr. Capone came to Navarro College as an Adjunct Instructor for Physics and Physical Science courses on the Waxahachie and Corsicana campuses.

“I became Full-time Faculty in December of 2007 and as Coordinator of the then brand-new Oil and Gas Technology program housed in the back of the John Deere building. I ran the Petroleum Technology Program from 2008 until 2012 during which time we built a nationally-recognized training center for Natural Gas Production and Processing Operations personnel. Our new facility was completed and occupied in early 2011, thanks to generous contributions from XTO Energy, EnCana, and Marathon along with the Navarro College Board of Trustees. I became Assistant Dean for Career and Technical Education (CTE), first in Corsicana and later Ellis County. I returned from retirement in June 2018 to once again lead the Navarro College Petroleum Technology Program.

My opportunity to teach students seeking career goals within Petroleum Technology has been one of the most rewarding experiences of my career. Students from all backgrounds have launched successful and lucrative careers from this program. My continued contacts with these students as they report back their successes is especially gratifying for me. We at Navarro College, in Petroleum Technology as well as other CTE programs are blessed with the chance to help students change their entire lives and livelihoods for the better.” His students say he is one of the most dedicated professors they have ever had.

Finding out on December 23, 2007 that I was the Coordinator for the then new Oil and Gas Program at Navarro College. On that same date, I found out that classes began on Jan 8, 2008 and there was essentially no curriculum for the classes.