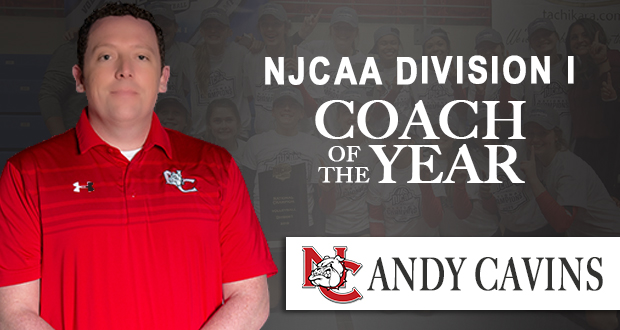 Andy Cavins was the perfect choice to coach volleyball at Navarro College.

That was validated again Friday when Cavins was selected as NJCAA’s Division I Coach of the Year after leading unbeaten, top-ranked and top-seeded Navarro to its first national championship at The Sports Arena in Hutchinson, KS, in November.

Friday’s honor capped a special 31-win season for Cavins, who also earned The Heidi Cartisser Coach of the Tournament award on the national stage at Hutchinson, and another American Volleyball Coaches Association (AVCA) Two-Year College Southwest Region Coach of the Year.

Cavins was hired in February to replace NJCAA Hall of Fame Coach Ronda Shirley, who became head coach at The University of South Carolina Upstate in Spartanburg, SC.

Cavins inherited four sophomores returning from a 38-7 Elite Eight finisher in 2018 and put together the NJCAA’s only undefeated team of 2019 – one that swept 22 opponents and dropped only 11 games all season. His Bulldogs became the first unbeaten D-I national champion since Blinn in 2011 (38-0).

Cavins, the all-time winningest volleyball coach at Lindsey Wilson College in Columbia, KY, is the first coach to lead a Navarro athletic program to an undefeated campaign during a first season. At Lindsey Wilson, he compiled an eight-year record of 272-38 (.877) and led the Blue Raiders to eight consecutive NAIA National Tournament appearances, including the 2017 national title.